I went for a bike ride around town to take some photos that would allow me to work  on my new editing software.  It was a sultry January day on the SouthCoast of Massachusetts with an approaching winter storm on the horizon.  I got the photo shoot done in plenty of time and actually the rain didn’t begin till after the editing was done.

2017 Fairhaven Photo Shoot by Bike from John Sullivan on Vimeo.

A 6 mile ride to yoga class that is part of the New Bedford Wellness Initiative today.  On the way to the Boys and Girls club, while climbing a hill, one of my pedals fell off.

I was walking the final half mile and came across a couple of old timers looking at a 1969 Camaro in a garage.  I borrowed an adjustable wrench from one of these friendly strangers and made the repair. The pedals were installed a few short days ago and I was very conscious of putting is on correctly and tight.

YO! GUYS.  PAY ATTENTION TO THE TEXT.

The problem was that it’s in two parts.  The pedals came with adapters for different sized cranks. The adapter screws into the crank then the pedal screws into the adapter.  I have no idea why this fell of because reverse threading on the left pedal insures that this doesn’t happen.  (To most people).  I’ll figure it out tomorrow.

END_OF_DOCUMENT_TOKEN_TO_BE_REPLACED

Cover photo:  The New York Five Boroughs Bike Tour starting area. (If you see windmills and lighthouses,click this post’s title to go there)

Unintentionally, when I was a bike commuter, I looked like a cop.  My bike looked like the Trek the police used.  I wore a blue windbreaker, black helmet and navy cargo pants with lots of pockets. You know the type. I also had a good sized trunk bag attached to the rear of my bike.  In the beginning I carried a back pack with my work clothes before switching to a single pannier.  When the weather got cold (I was a year round commuter), I donned a balaclava or a simple face mask. Sunglasses always, they added to the look. I was asked a few times if I was five-oh.  Usually while biking through the not so good sections of Taunton, MA.  My response was always, “do I look like a cop?”  Never denying nor acknowledging their question.

My office was 40 miles from home which allowed me to be what us cool bike riders call, a bimodal commuter.  A thirty mile drive to a safe parking spot followed by a ten mile bike ride on mostly back roads and off road paths.  The following are some of the crazy encounters I experienced during my six years of commuting by bike.

The early morning ride would take me on some busy roads but I was early enough to beat most of the traffic.  The worse part was that I had two high schools on my route.  Fortunately I got by both of them before 6:30 AM. We all know how kids drive around their high school.  There is an overabundance of testosterone that increases exponentially as they get closer to the school.  The other morning group was the blue collar drivers on their way to work.  This group always gave me plenty of room either thinking I was a cop or possibly I had lost my license for DUI. (Driving Under the Influence).  Whatever their reasoning, it was no problem sharing the road.

At the half way mark of the ride I would leave the main streets and detour though the old state asylum.  These days it was where the accused went for their 30 day psych evaluation. It also had a juvenile detention center and a couple of other state agencies.  Back in the asylum heydays the place was overrun with squirrels.  Probably because there were so many nuts there. OK enough of that.  One day as I approached the entrance I spotted a young man leaning over his bike looking at his chain.  He was smoking a cigarette and really concentrating on the task he was performing.  I carry basic repair tools on my rear trunk bag so naturally I approached this possible rider in distress.

“Everything OK?”  I asked

“I have tools if you need them”.

This twenty something guy, in a shady part of town, with a 1980’s vintage bike, looked up at me, his eyes bulged, he gasped then ate his cigarette.  As I approached I got a whiff of some good hydro pot, smiled and said, “just out for your morning tea. Good for you”, and rode off.

Another part of my route took me through an abandoned hospital that housed severely handicapped children and adults.  Any one would be hard pressed to find an unbroken window or door on any of the many buildings. It was also a magnet for homeless people and cats.  There was a 24 hour security roving patrol and over the years I got to know the guards who would often stop and chat as I traversed their turf.   On this particular day the security car pulled up with a young guard at the wheel.  He was new and asked me questions as he drove along side of me.  I told him I was a regular and mentioned a few of the guards I knew by name.  He was unimpressed and asked me what I was carrying in my pannier. I’m sure he was thinking terrorist since this was several years after the Twin Tower incident.  I stopped, dismounted and said “your welcome to look” while holding up the pannier.  He got out of the car, snatched the back bag and undid the clasp.  As he opened the bag to look inside I couldn’t help myself.  I clapped my hands and yelled BAAAM!.  I though his reaction was funny and never expected him to sound like a fourteen year old girl at a Justin Bieber concert.  I grabbed by bag of clothes off the ground where he dropped it, mounted by bike and rode off nonchalantly to work.   I was told that he compounded the incident by telling my friends, his coworkers what happened.  They got a kick out of it.  Indoctrinating the new kid, ya know?

Because I rode that hospital area every day, when something is different, it’s and attention grabber.  On a nice summer morning I was meandering to work when a set of traffic lights an a side street caught my eye . This was one of those delayed reaction things. After riding for almost a minute I couldn’t put that aside.  I turned back to investigate and saw there were a lot of improvements to a couple of the abandoned buildings.  One had been converted into a market, there was cornfields where there was once overgrown five foot tall weeds.  There was a park and the streets were swept clean.  One of my guard friends drove up and told me they were going to shoot a movie there.   It turned out to be “The Surrogates” with Bruce Willis and Vin Rhames.

Shooting began a few weeks later and I tried to ride my bike close to the shoot in progress.  A new guard stopped me from getting anywhere near the area.  I did notice however that everyone was wearing over sized orange colored badges hanging around their neck.   At work, I cut a piece of cardboard to the approximate shape, colored it with and orange marker and on my way home rode up to the action like I owned the place. No one questioned or stopped me.   I actually ended up getting  a part as an extra and made the final cut.  Me and my bike no less.

While in New York City for the Five Boroughs Bike Tour, I managed to stumble upon another movie set and yes, I got myself a part as an extra.  I’m in the crowd watching the shooting victim on the steps of the New York Supreme Court building. The answer to your two questions, no, I didn’t get paid and no one can get within a country mile of any big star on the set.

In conclusion.  The pace of riding a bike allows us to experience so many things we miss when we are in a car.   Meeting people and doing things is so much more fun than listening to XM radio while drinking coffee driving 70 MPH on the highway.

In response to The Daily Post’s weekly photo challenge: “Scale.”

While in Colorado this past summer, we visited the Chihuly exhibit at the Denver Botanical Gardens. I had my cell phone and a small point and shoot camera.  After taking a couple of standard shots of the glasswork, I wasn’t very impressed with the outcome.  The photos seemed “too busy”.   I decided to move in very close and try my luck. 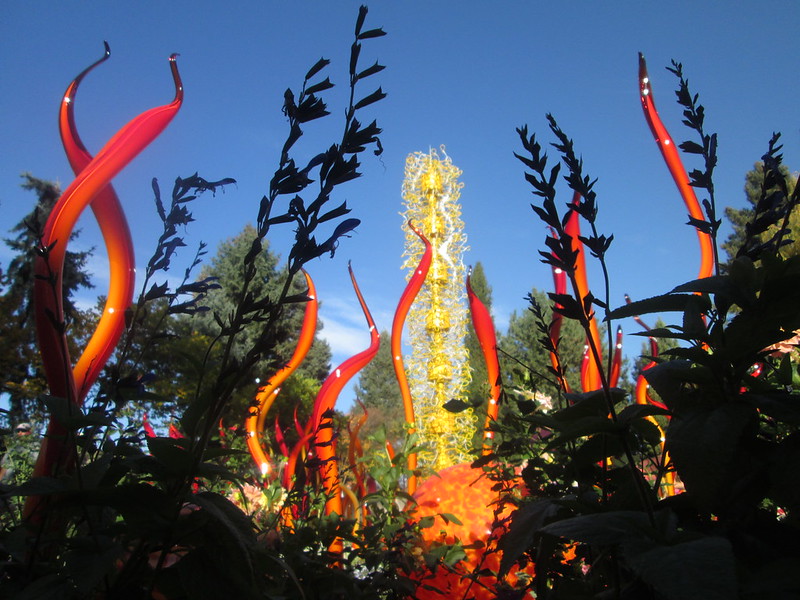 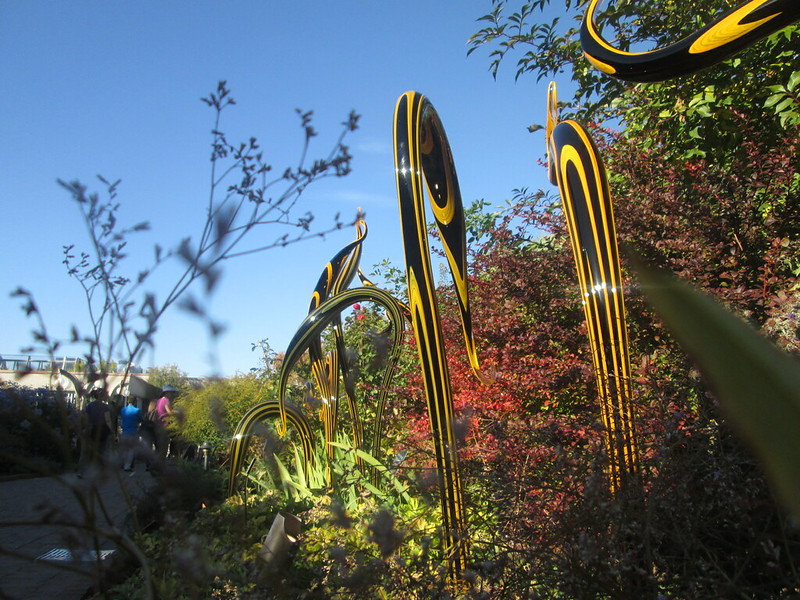 I’m learning the ins and outs of my first DSLR camera by learning how to work it in Manual mode.  Slow but sure, I’m getting the hang of it.
As always, click any photo for big. Click again for bigger

Hello From the Great State of Massachusetts

Posting from the SouthCoast of Massachusetts just off Cape Cod. From my window, I can look across Buzzards Bay to Falmouth, Ma.

This is mostly about and related to bicycle riding, but not exclusively. Make yourself comfortable and look around. Comments are always appreciated.

"OUT and ABOUT on the RECUMBENTS"!

Lost in the Bozone

fivebeansoup.wordpress.com/
There And Back Again

Life at 15 miles per hour

Sailing, Psychology and other random incidents

Do What You Fear And The Fear Disappears.

Not suitable for children, the sensitive or those hoping to get into heaven.

Heather Hops Around The Globe

Travel makes one modest. You see what a tiny place you occupy in the world. -Gustave Flaubert

cycling less than i plan

"Life stories with a bend"

This is gonna take awhile 😳😂

Cycling to work & back, to the shops....anytime that I can use my bike instead of the car.Sometimes I even get on it just for fun & fresh air!

A Blog about any Thoughts in my Head: Politics, Writing, Life

The Dude Abides. I'm A Dude AbiKes. I wonder as I wander around Austin on a bicycle.

Using a little bit of perfection found by sifting through the day to brighten my mood and hopefully yours.

A blog about being fifty-ish, keeping fit, and acting the fool...

We're gonna travel the world by bike to spread love, respect and culture of bicycle all over!

It's ALL An Adventure

intelligence, strategy, and security in a dangerous world

Ramblings of a Writer

Living the Path of Life

a bike for all seasons

Ruminations & stories of riding bicycles in all four seasons.